Feb 11th, written on Hesperides whilst going up the Beagle Channel

Posted in Ushuaia, March 4th. Hopefully, if the electric and internet works today…

Weddle seals and crab eater seals lie littered around the beaches of Deception Island like massive turds, often with a slug like trail in the sand where they have hauled themselves out of the sea.

These are true seals, which pull themselves along with their furry front flippers on land and have just a hole for an ear unlike the sea lions – known as sea wolfs here – and fur seals, which walk on their four, skin covered flippers and have exterior ear tufts.

I can’t really tell the difference between the weddle seals and the crab eaters, they all look similar and allow you to walk past as they snooze. Some more alert specimens open their Disney like eyes to watch you approach and then continue to watch as you walk behind, they don’t turn their heads but instead flop right over and continue watching upside down with one flipper in the air.

(It has just occurred to me on typing this up that they can’t turn their heads as they have no neck, so upside down full body watching is the only option.)

Sea lions and fur seals on the other hand move very differently, by lifting their bodies from the ground and walking on all four flippers. The back flippers look almost painful to walk on and the whole process is most ungainly, like the penguins their bodies don’t make sense until they are in the water.

Watching these animals walking and then swimming brings to mind hazily remembered stories of Selkies and Mermaids, I can see how these legends came about, stories told by generations of people who share their landscapes with these beautiful creatures.

They all have terrifically thick insulating fur for which they were hunted nearly to extinction in the past. In the water they look smooth; dark, slick shapes gliding and jumping and looping effortlessly through the waves. They seem to show off to us and perform elaborate displays with backwards swimming and flipper waving, they are really enjoying themselves and enjoying being watched by us.

I can never leave one of these displays until the end, there is something especially wonderful about watching those black flippers in their element waving at me against the backdrop of the Deception caldera.

Fur seals and sea lions are quite different when you see them side by side but I can’t tell them apart when there is just one kind. The fur seals have more of a Staffie face compared to the longer nosed Labrador shape of the sea lions. I think that at Deception Island they are mostly Fur Seals with a few Hooker’s Sea Lions.

Be they sea lion or fur seal they all look just like rocks on the beach until you are almost standing on them then they rise up with the most alarming noise and bare their teeth and charge at you. We kept trying to make more noise on approaching so as not to take them by surprise but they are determined to be shocked and defensive. 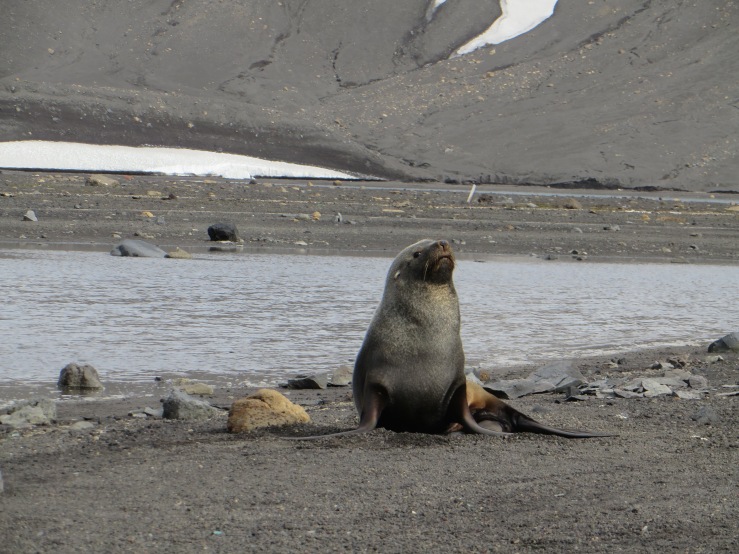 They are fond of sleeping on the most narrow bit of beach in front of a cliff so one is forced to pass close by them, I’ve found that a little sea lion chase delivers just the right amount of adrenalin to make a 8kg Viking suit feel light as air.

Leopard seals are the most ferocious seal, I saw one on the sea ice by Livingstone Island with a pup but was pleased not to have an encounter on foot.

We found a dead leopard seal pup on Deception Island. Feet for scale – and this is only a baby.

Just look at these teeth!  All the same other than varying in size, there are no molars for chewing but this serrated shape looks ideal for biting and ripping.

We saw one Elephant seal on the penguin beach by Neptune’s Bellows, it looked golden next to the brown fur seals. I think it was moulting.

I don’t have a picture.

We saw one whale inside the Caldera at Deception Island, a rarity apparently. I’ve heard tell that they don’t like to come in because the sea floor is littered with the bones of the thousands of whales butchered and boiled up for their oil in Whalers Bay.

I was hoping to see some Orcas or a Blue whale but nothing as yet.

All the seals and sea lions have magnificent whiskers, my dream was to find one on the beach but no luck.