The reason we are at Deception Island is to take samples and collect data in order to make predictions about how future climate change might affect food webs.

We are taking samples from terrestrial, freshwater and brackish (salty/fresh mix) intertidal locations and testing all sorts of things at those sites on a temperature gradient caused by geothermal activity. 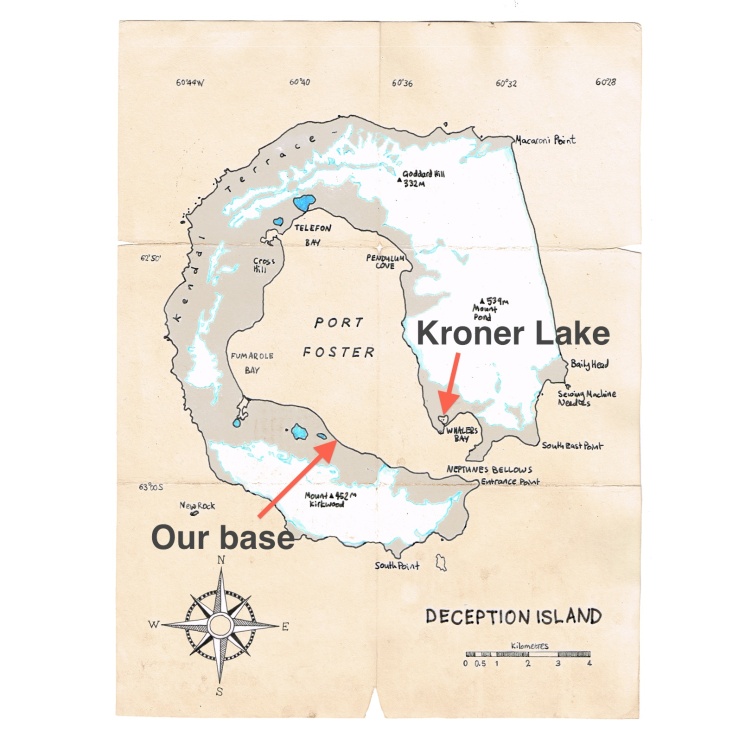 One of our intertidal sites is Kroner Lake close to Whalers Bay, where until not long ago people used to drag thousands of harpooned whales from the open sea and chop them up and boil them for their oil.

The first time we visited Kroner to scout it out for suitability we were dropped at Whalers Bay in our Viking dry suits and walked around the headland to Kroner Lake (walking in a dry suit on sand whilst carrying rocks/metal stakes/sledgehammer is a serious workout, I’m thinking about licensing it as a new exercise routine in the UK) 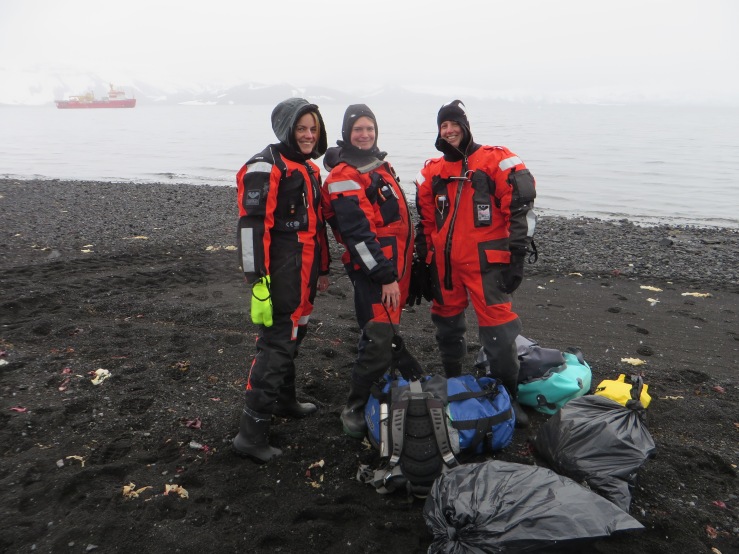 (In the background is British Antarctic Survey ship Shackleton, they visited Deception and came to the base for tea.)

Geothermal sites look wonderfully dramatic and mystical as you approach. 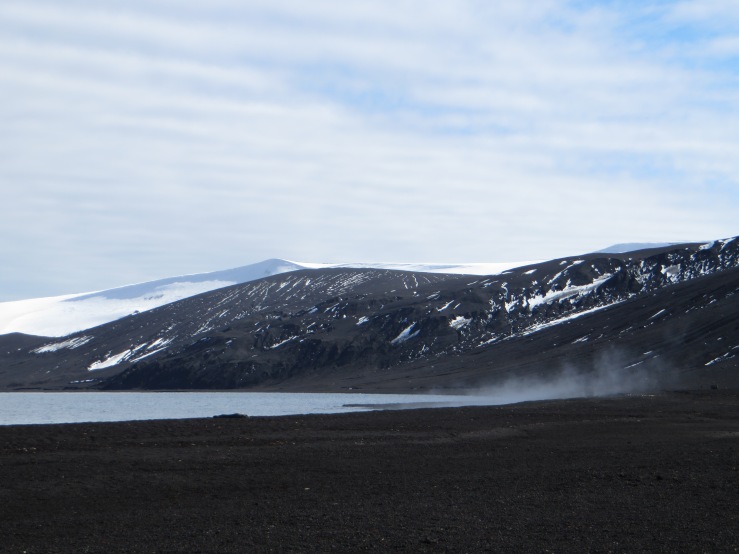 There were a scattering of sea lions and crab eater seals on the beach who lifted their heads and waved their flippers as we passed, beyond them were clouds of steam appearing from the gravel and dancing in the wind, sweeping dramatically this way and that over red yellow and green coloured mud. 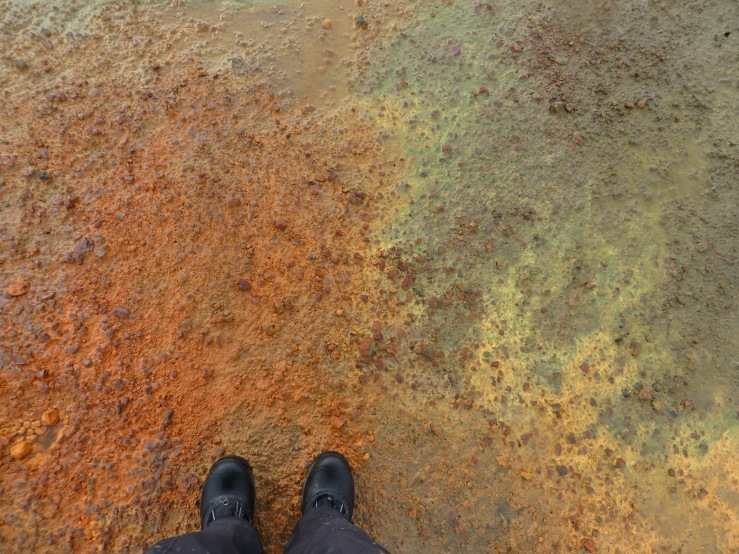 The mud stinks of sulphur and rotting algae and it bubbles pleasingly in places, reminding the casual scientist that she is standing on an active volcano. 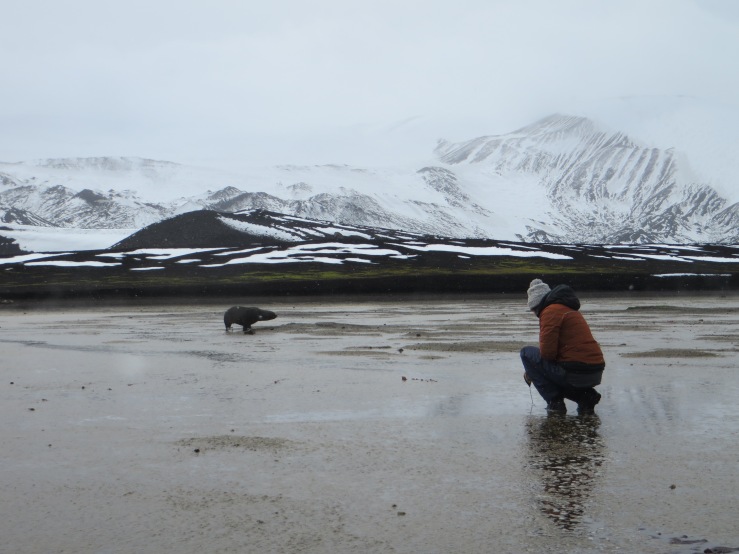 Probing for a temperature gradient with a curious sea lion

At each location we go about probing the ground to find a range of temperatures.

At Kroner Lake we found 5 sites with a range from 30°C to 5°C. Each site is then divided up into 5 patches with scientific flags made from orange tape and fruit skewers, I knew my making skills would come in handy at some stage. 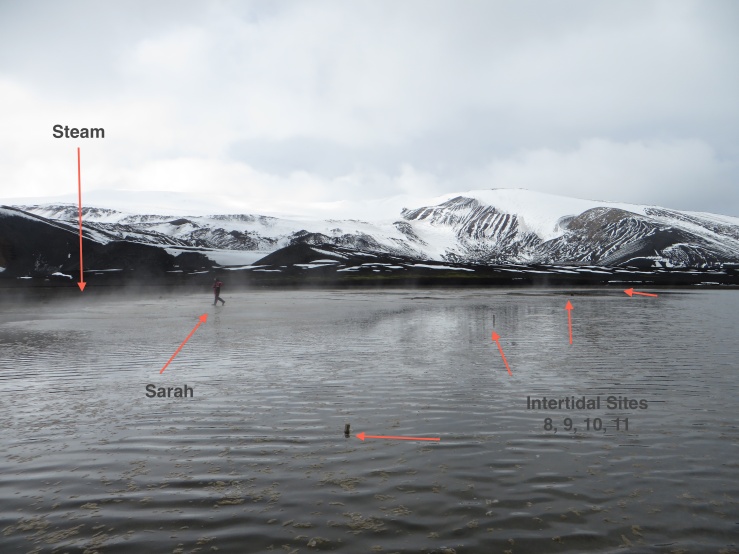 It is important at intertidal locations to keep a keen eye on the tidal activities of the day or you may find yourself working underwater and having to wade ever deeper, back and forth, in your Viking dry suit, of which you finally see the point and for which you are deeply thankful. 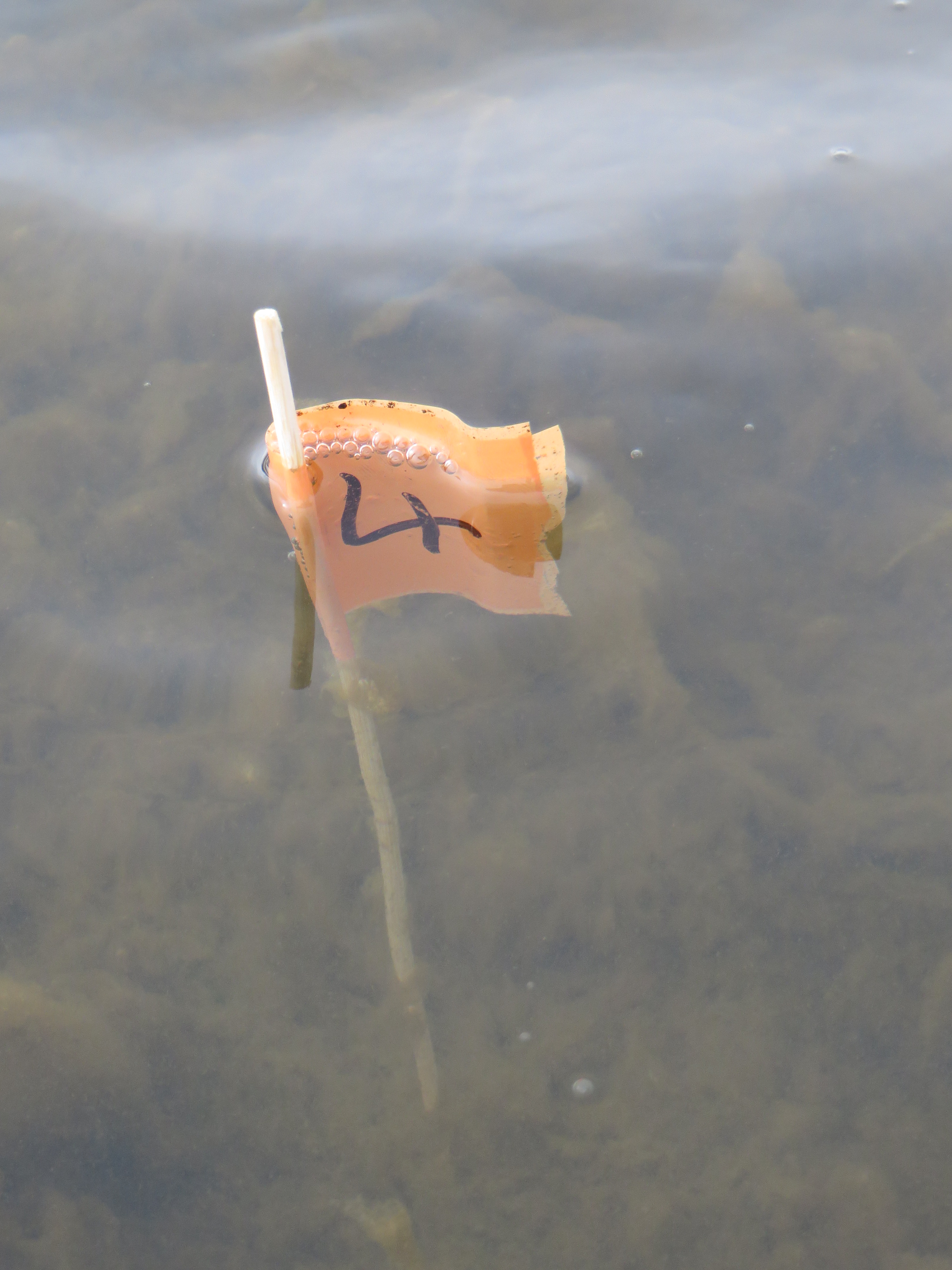 We test pH (acidity), Conductivity (saltiness/mineral content) and Oxygen levels in the water. Then we do Water Chemistry, which I really enjoy as it involves all sorts of different tubes and syringes and filters which I finally know how to label and fill up properly.

I fill up a little tube until it has a water drop globe on top and then Sarah has to inject the globe with Zinc Chloride which would have serious consequences were she to inject it into our fingers.

Then we take core samples which means scrabbling about in the gravel with a garden bulb hole digging tool and making soil cores which we place in plastic bags. And label them.

Michelle takes her sediment samples, scooping up the mud and shovelling it into an array of tiny plastic tubes whilst Sarah and I do the rock scrapes.

These samples will be tested for the numbers of Diatoms – single cell plant life – and the total amounts of chlorophyll at each patch.

The contrast of scale is very exciting, one minute I am peering down into this puddle of tiny bubbles and then look up and see the massive volcanic rocks of Neptune’s Bellows in front of me.

When we first started sampling I could not understand a single thing about the labelling system or what was for what and where it should be. How could you possibly toothbrush rocks with frozen fingers and inject lethal stuff into tiny water globes whilst standing in bubbling mud and biting Antarctic wind?

I think it just takes practice. I still don’t really know what I’m doing but I know how to do it most efficiently.

Quite a few times.

The bonus of being in an Antarctic location with geothermal activity is not scraping rocks, it’s hot water. We warmed up in the 35°C bath while we had our tea and prepared to get very cold again. 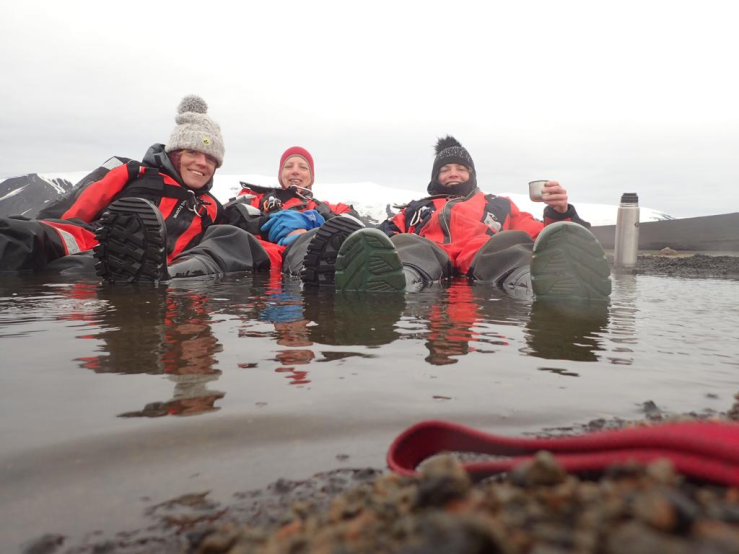 A nice cup of tea and a sit down in the spa.

It’s actually quite deep but your feet float when wearing a drysuit. Not totally suitable for bathing but does mean that you can balance your snacks and tea on your bouyant tummy while you wallow.

5 thoughts on “Sampling for science”