Breen means glacier in Norwegian and it is a word I have been hearing a lot over the past month as I explore the Arctic islands of Svalbard.

60% of the land here is covered by glaciers, vast rivers of compressed ice and snow, which force their way through the landscape. Glaciers are made when there is lots of snow falling in the winter. In a place like Svalbard where the summer temperature is not warm enough for the snow to completely melt, it turns icy, and then next winter more snow falls onto this icy base. Gradually, I think the glaciers here are about 4000 years old, the snow and ice layers become immensely thick and the sheer weight of ice forces them to slowly flow down from the mountain valleys where they started. The glaciers carve their way through the rock and carry boulders and mud with them as they grind their way down to the sea.

In North Wales and the Lake District you can see landscapes which were sculpted by glaciers, England must have looked a bit like Svalbard all that time ago.

Smeerenburgbreen was my first glacier experience and it was amazing. I was shocked by how E N O R M O U S the glacier is. From the sea you only see the nose of the glacier, the rest is on land flowing from the mountains. 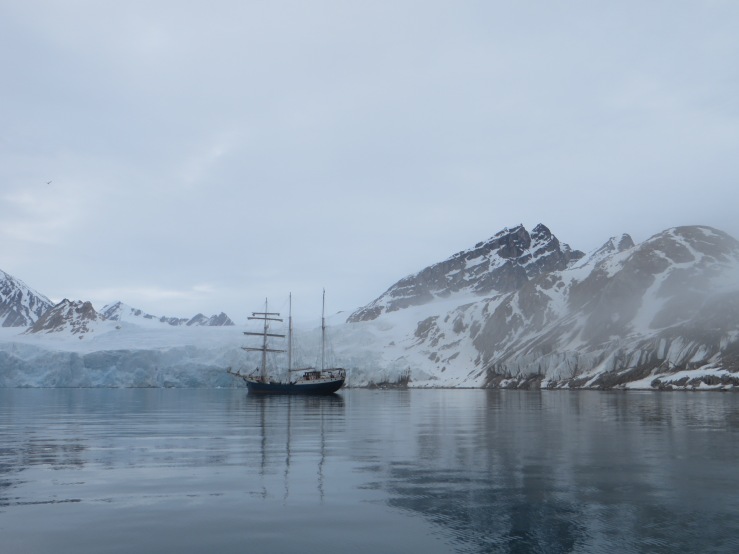 Here is our ship, the Antigua, anchored in front of the right hand edge of the glacier. The ship is quite far away and the glacier is very high. Glaciers are dangerous because they are always moving, as the ice touches the sea water it begins to melt and at the same time more and more snow and ice is pushing forward from on top. This means that chunks of ice crack off and fall into the sea, and not just ice cubes, small chunks as big as buses, and big chunks as big as buildings.

They could easily sink a boat so you have to keep your distance. The rule of safety is to hold out your arm and when you measure the face of the glacier against your fingers it should be less than three fingers high. I’m not sure what this means, but it is the rule.

The rule brings back vague memories of measuring a tree with my shadow for maths when I was 11. Have any of you done that, Arctic Adventure Gang?

If the glacier is less than 5cm high (height of my 3 fingers) from 60cms away (distance from my eye to my fingers) then you must be x far away from x high…?

Answers on a postcard. 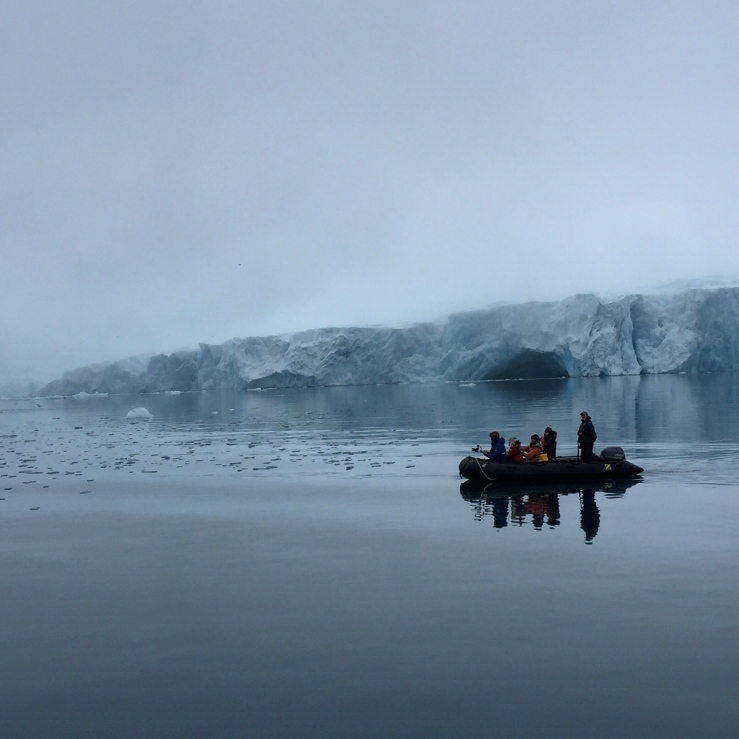 I went off on a Zodiac (rubber inflatable boat) to explore further.

We found some Walrus poo, it looked like tinned tuna but wasn’t smelly which was odd. I suppose things don’t smell so much in the cold. Didn’t find a walrus. 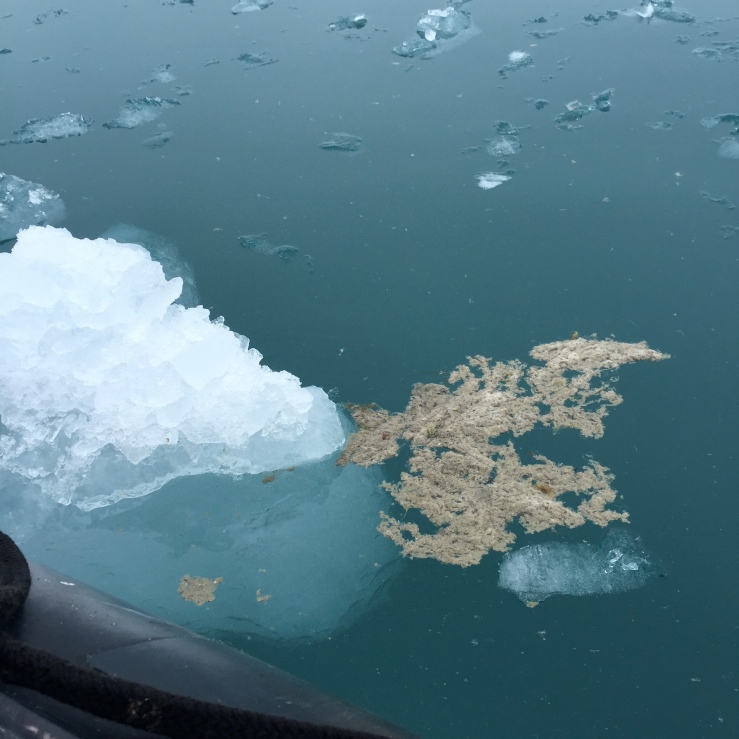 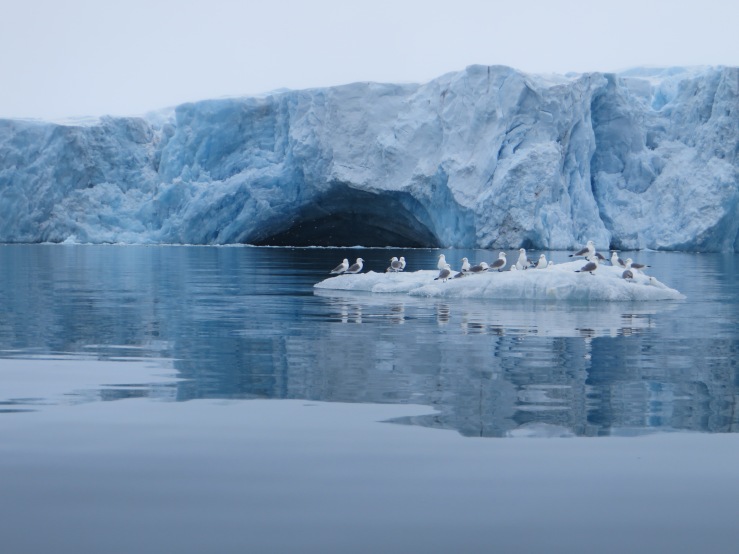 That cave you can see behind the birds is enormous. If you look really closely you can see tiny specks which are birds flying nearer the ice face. The place where the freshwater from the glacier mixes with the salty sea is rich in delicious little creatures that the fish and birds like to eat. 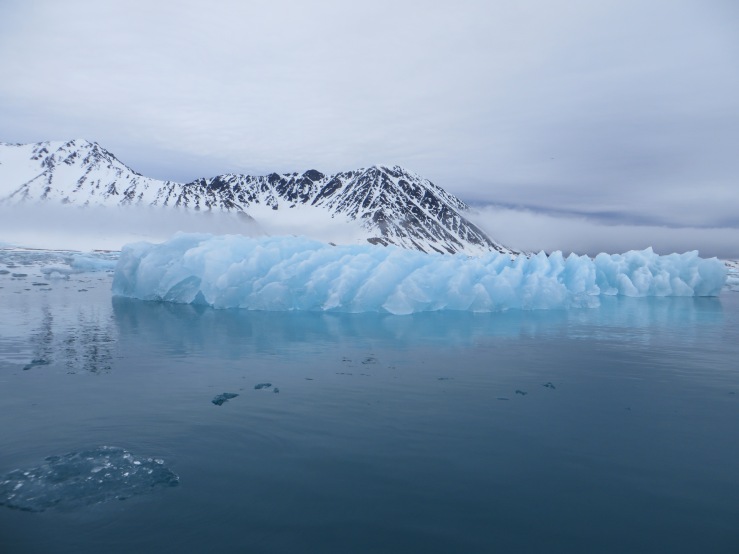 Everything was quite grey in the beginning but as the light grew brighter the ice began to look blue and glowing as if it had lights inside. 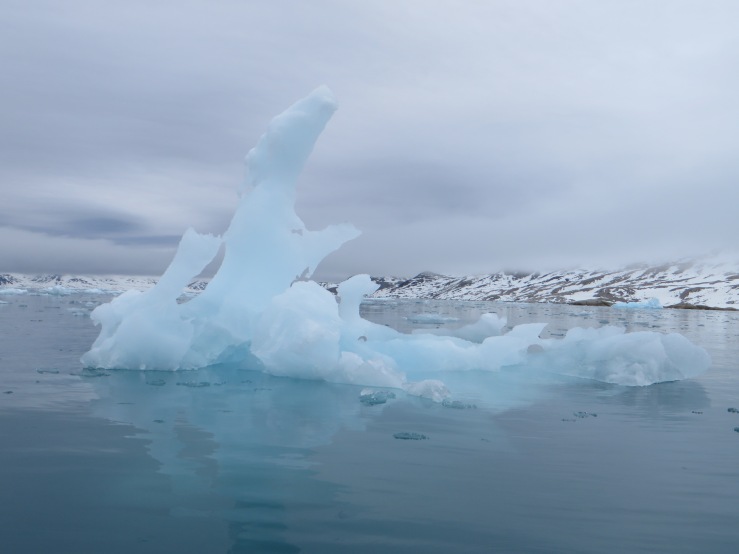 When chunks of glacier fall off into the sea it is called Calving – (as in a cow having a baby, not as in carving roast chicken.)

Annoyingly I was in my cabin when Smeerenburgbreen calved.

I was just brushing my teeth when I heard this tremendous booming sound like a far off cannon firing. It vibrated through my body, I could feel it in my kneecaps. I leapt onto the bunk and stuck my eye to the porthole where I saw the first top right section of the ice cave cascading into the sea. Over the next few minutes there were more extraordinary sounds as further chunks of ice cracked off and fell in. 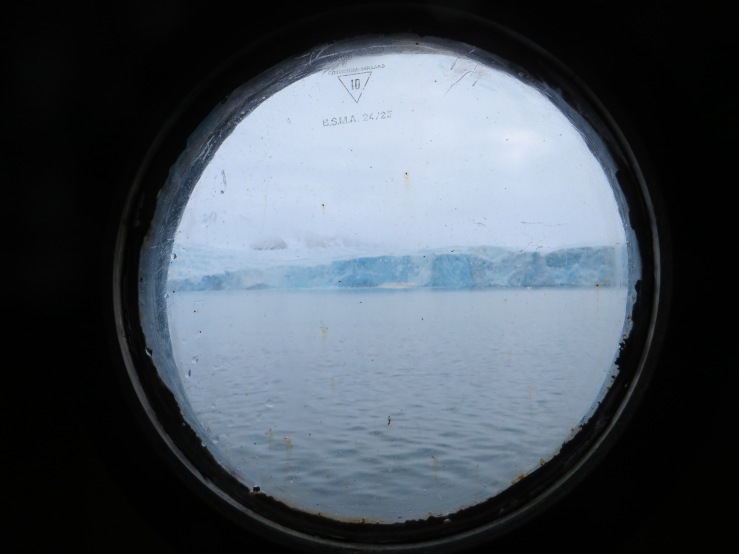 It was the cave that the birds were in front of earlier.

My friend Eric Esterle filmed it.

Maybe you can see it here…

All the Kittywakes and gulls were flapping about and making a racket, and then came the waves. Until this moment the Fjord had been totally still with flat water, blue ice sculptures floating serenely by, and not a breath of wind. From where the ice had fallen there now swelled big waves which washed the pieces of broken ice away from the glacier and churned up the sea making the Antigua lurch about. 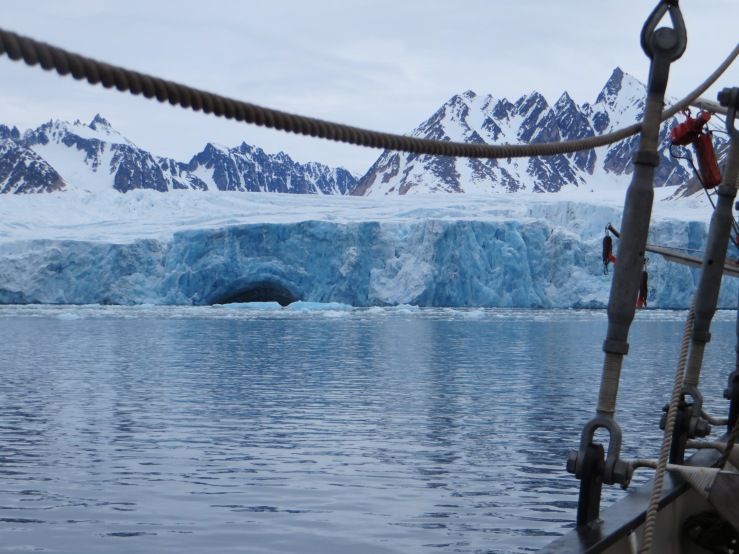 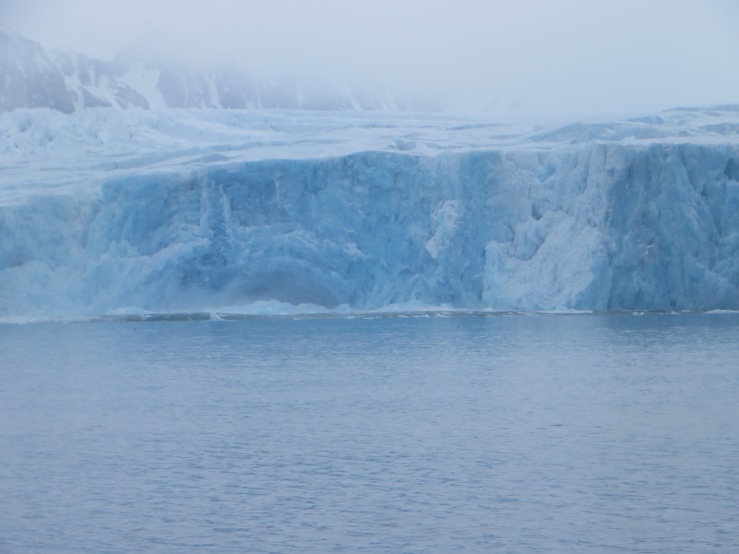 Then it was all over.

The birds settled down.

The glacier made a couple of creaks and groans and fell silent. 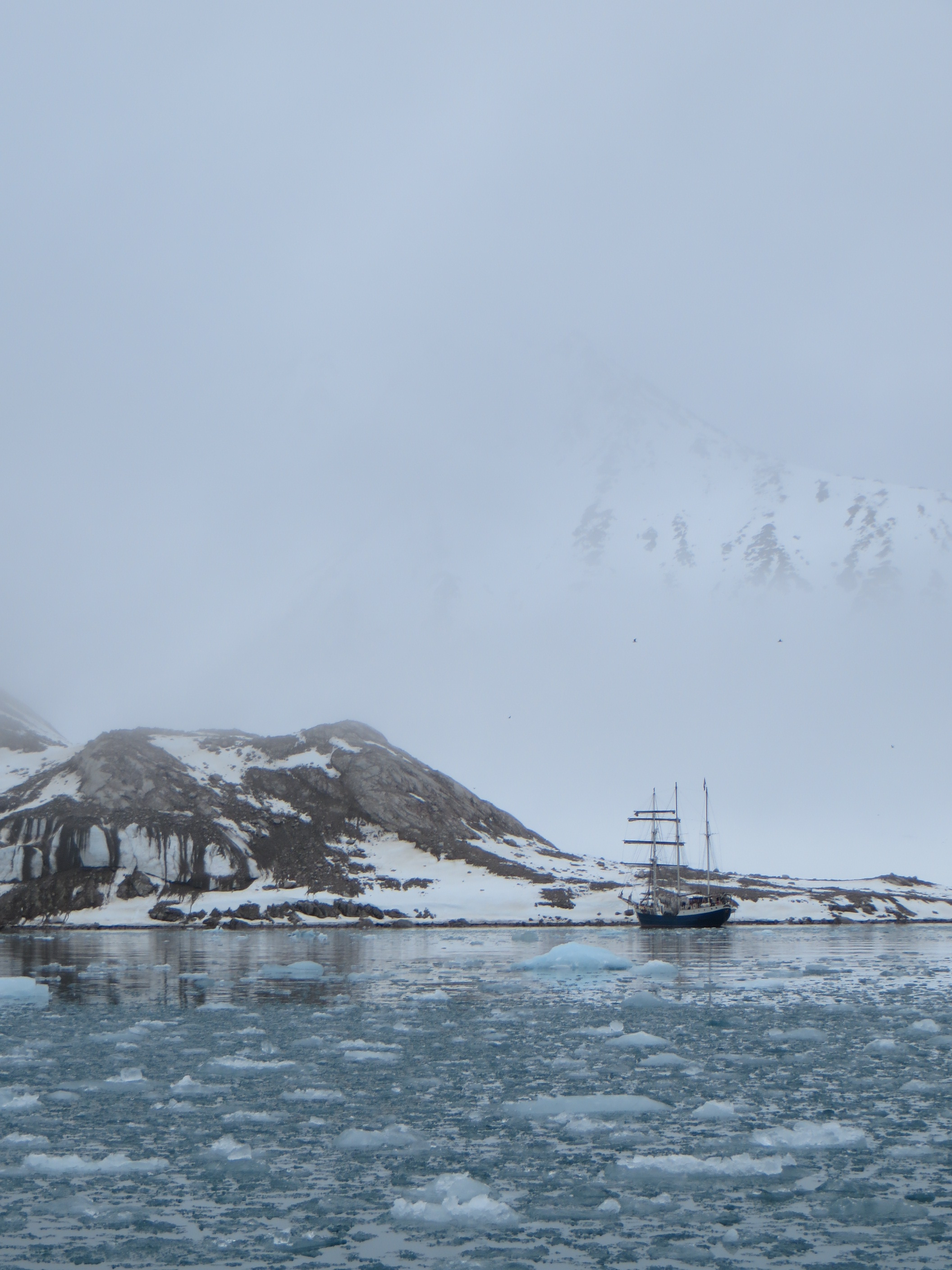 Once again the sea around the boat was still, but the water wasn’t quiet now, our ship was floating in a soup of ice. Little chunks like slush puppy with bigger pieces the size of sofas and chairs swilling around, and they were all making a noise. There was popping and rustling and turning and swishing as well as the scraping of ice on the metal hull of the Antigua.

I’d never thought that ice would be so noisy. 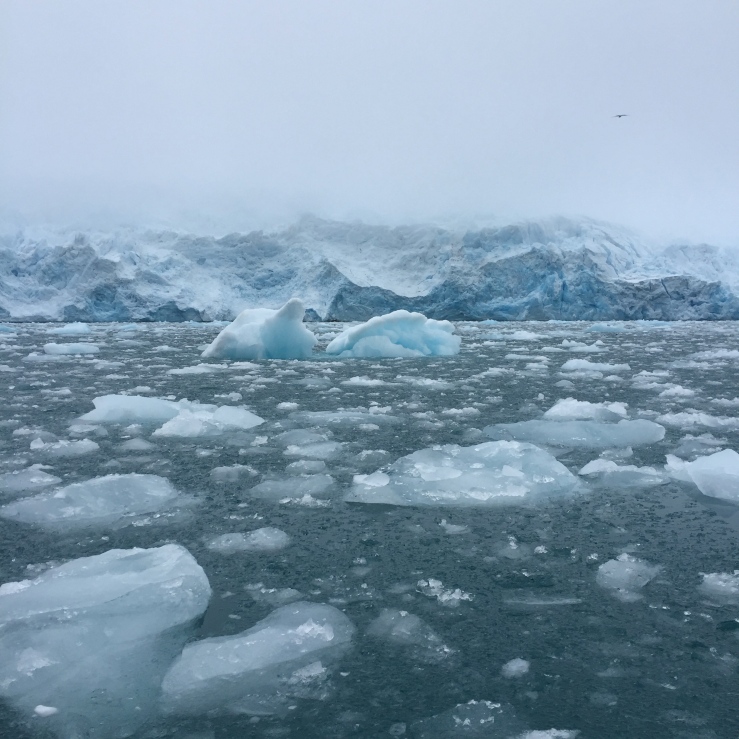