The biggest town in Svalbard is called Longyearbyen and this is where I stayed for a month after our expedition on the ship Antigua.

With a population of about 2000 the old mining settlement of Longyearbyen sits in a valley at the foot of two glaciers. A string of wooden buildings on stilts leads to the town centre, a pedestrian street with a supermarket, and then down to the seafront where coal trucks trundle to and from the last working mine, and boats, cruise ships and shipping containers chug about on waves, wheels and skis.

Grey skree slopes form the steep sides of the valley, which was created by ancient rivers of ice gouging their way down to sea level. The cliffs are littered with old bits of mining equipment; wooden structures stand in lines stretching all the way to the old coal processing plant, a huge iron and wood building crouching on spidery tiptoes just beyond the church.

On first assessment I thought this was a grey place. The weather was grey and drizzly, the rocks were grey and dusty. The grey clouds move all the time in the Arctic wind, sweeping through the valley yet never leaving the tops of the grey mountains surrounding us. The sun circled above day and night without dipping below the horizon, it cast only short shadows and I never saw twilight, dusk or dawn.

I walked the broken dusty road from the sea to my studio at the top of the valley – and back again – every day and as time passed I became familiar with the environment. I began to see the beauty of Longyearbyen.

The skree was a dusting of grey over larger rocks of rich browns and oranges. In the rain the earth glowed red, the colour of traditional Norwegian house paint. And it smelt of iron.

I was there in July, high summer; emerald green moss was sprouting and grass began to grow and spread from the river flood plain up the sides of the valley.

When those clouds lost their grip on the tops of the mountains I could see the black summits with their contrasting crevices packed with white snow, brighter than the sky. The shining Arctic sun transformed everything. I’m used to this difference in the light on the south coast of England but the colours in Svalbard are much more intense and rich. Usually the sun decided to make an appearance just as I was going to bed!

Most of the buildings are wooden constructions, nothing rots here because of the cold dry climate (until recently, but that is a different story) and the wooden cladding is all painted in different colours. The school has a rainbow of painted window frames, the pretty little triangle houses are painted pastel green, mustard and tan.

I heard rumours that it was someone’s job to be in charge of paint colours but I couldn’t find out who this was or where they would work so I poddled off to the library to see what I could find out.

Turns out that in 1981 the Spitzbergen Coal Company, which owned most of the buildings, commissioned the designer Grete Smedal to create a colour plan for the whole town. I found her book, ‘Longyearbyen in colour’ with these wonderful sketches of her colour ideas. (see below)

The big problem Grete faced was the enormous changes in the landscape throughout the seasons. In summer there is bare black rock and intense bright sun, winter brings absolute darkness with everything illuminated by electric light and most of the year is dull with a backdrop of deep snow

The book revealed that there is a record of the colours of every building in Longyearbyen so I set off to get my hands on this. Eventually my investigations led me to the Local Authority Buildings Archivist who seemed rather suspicious of my motivations. Finally convinced that I was just a mad artist she handed over a stapled document, it was about 30 double-sided pages of exel spreadsheet in tiny type. I was so disappointed, I had thought I was going to be leafing through sketch books and mood boards and drawings like those in the ‘Longyearbyen in Colour’ book.

The thousands of codes correspond to colours on the Natural Colour System which is what architects use to define their colours. I found the catalogue online and realised that I was going to have to go through every single number and match it up with its corresponding colour sample.

What a BORING job.

I started one evening when I was back in England. I have to say that I had rather lost heart in the whole colour thing, but thought I’d better give it a go having put in so much time at the beginning.

As soon as I began to type in those annoying codes and identify the colours, I could see Longyearbyen appearing before me. There was the rust of the iron rich rocks and there was the golden yellow of the round crusty lichens.

Grete Smedal’s codes took me on a journey, discovering the colours of Longyearbyen. Now when I look at those brightly painted buildings I can see why they are those colours and how they came to be so.

I have a small cardboard box labeled ‘Colours of Longyearbyen’ filled with many pieces of coloured paper and codes.

Sure that’ll come in handy. 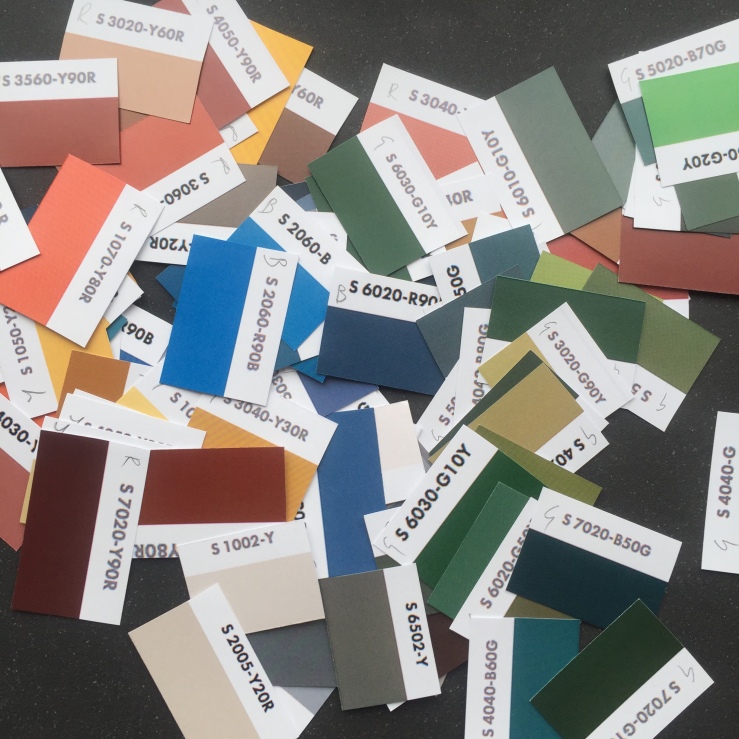 2 thoughts on “Longyearbyen in Colour”