Back in May it was warm and cosy at the Natural History Museum when I hatched my ‘Fossilised worms teeth’ plan.

The plan had seemed simple and exciting:

Go sailing in the Arctic Sea.

Land on the beach at a place called Kapp Belvedere.

Walk up the river valley there.

Bring the rocks back to the Natural History Museum.

Giles and Richard at the Natural History Museum gave me a photograph of where to go, and off I went.

On the day we neared Kapp Belvedere in the good ship Antigua, the weather turned nasty. The captain warned me that the ship couldn’t go any further and it was going to be a very bumpy, wet and cold 14 mile ride in the Zodiac (inflatable rubber boat) to get there.

Did I still want to do it?

So off we went; Sarah our guide, Alvin driving the Zodiac, Lucy and Hailey who thought they might know what Limestone looks like, and me.

It was indeed bumpy, wet and cold, it was all I could do to cling onto the little ropes on the side of the boat and stop myself flipping over the side as we hit each massive wave. The wind was freezing, the water was freezing and it was all blasting in our faces.

We arrived at Kapp Belvedere and tried to find the place in the picture.

My instructions were to stand on the point so I could see the red hut, then just behind me there would be a river valley which I should walk up to find the limestone rocks.

It didn’t look like the same place at all!

We only had a couple of hours. Alvin had to stay in the boat, it was raining and cold and we only had a little chocolate and water with us.

But where were we supposed to look for Conodonts!?

The expedition had felt like an exciting treasure hunt before we set off, but now I was asking people to walk up a mountain to help me find fossilised worms teeth that we couldn’t even see. And I didn’t know if it was the right place, or what Limestone rocks actually look like.

I was feeling pretty stupid; if I had the coordinates for where I was supposed to go, we could have popped them into a Global Positioning System instead of wasting time investigating the coastline, trying to match it to a photo!

We could trudge through the boggy ground and try to find another valley, or we could carry on here and hope that when we turned the corner it would magically look just like the picture.

It was my expedition so it was my decision.

I thought of brave expedition leaders of the past, real Arctic Explorers. They didn’t dwell on their mistakes or let their team see they were downhearted. They would Think Positive and Rally Their Troops and Onward and Upward etc.

I had to make a plan.

I thought that maybe over the last couple of years the snow and water rushing down the gully must have changed the look of the place, hopefully when we got up there we would find some Brachiopods and Limestone.

So off we went.

By the time we had sloshed through freezing melt water, smashed through brittle ice bridges and climbed up into the valley, it still didn’t look good but at least we were a bit warmer.

There had been landslides at the sides of the river, so instead of  a neat seam of limestone there were all sorts of rocks higgledy piggledy all over the place, and they kept sliding and rolling when we stood on them. It seemed rather dangerous; I remembered that I had been told to be careful and wear a hard had and safety specs. At least we had the rifle so we were safe from Polar Bears.

I couldn’t see anything that matched the stone I had seen at the Natural History Museum. I was secretly in despair, I handed out some chocolate so that everyone would carry on thinking this was a fun expedition.

At last at the side of a rock slide we found the unmistakable bum shaped Brachiopods, what a relief!

These showed us that we were in the right time period – between Cambrian and Triassic – for Conodonts. They looked different from the ones I had looked at in London. Were they Limestone?

I collected loads of rocks, just to be sure. One of them might be right.

I found a lump of stone which seemed to be especially heavy, it fitted neatly into the palm of my hand and I thought it might be sky iron or a meteorite. No one else thought it was. I’ve got it so I can look it up later. 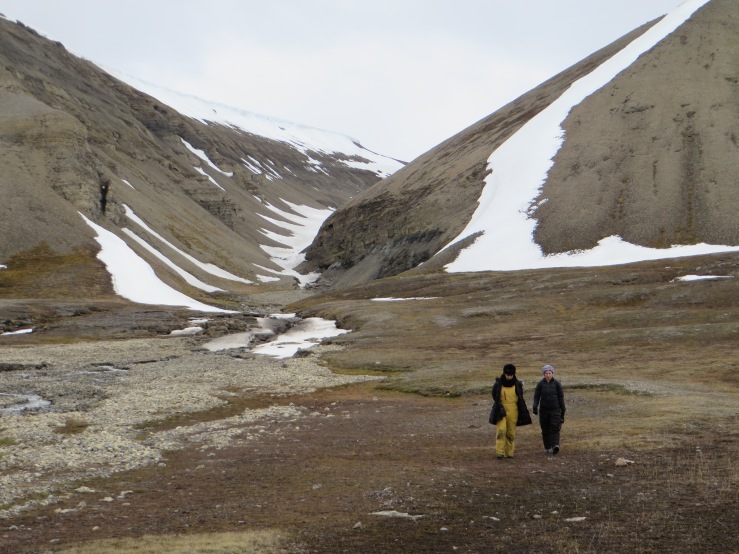 On the way home the sun came out and the sea was calmer, as the Antigua came into view we were bouncing over the tops of the waves and a flock of puffins came and flew all around us beating their silly little wings. They are the funniest birds, it was wonderful to see them flying so near, at head hight, with their striped beaks and their triangle feet sticking out from the corners of their bodies.

I loaded my bags of rocks onto the ship and wondered how on earth I am going to get them back to England.